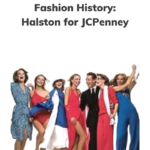 Before Jaclyn Smith brought fashion to the style starved aisles of K-Mart, before Isaac Mizrahi helped change Target to Target (pronounced with a French Accent), the king of disco era fashion, Roy Halston, debuted a line at the venerable department store JCPenney.

The Halston III line for JCPenney debuted in stores in 1983, and with it the first truly masstige fashion line, a mass market fashion line developed/licensed by a high-end designer or brand, was born.

Halston III for JCPenney commercial circa 1983/1984

The line was a big hit, which promptly “downgraded” the Halston brand in the eyes of elite New York stores like Bergdorf Goodman, who, along with others higher end department stores, stopped selling the higher priced Halston lines. The Halston brand became a household name, but lost its prestige (this was before internet stores like Bluefly and even outlet malls, both of which made designer brands more accessible to the masses).

Ahead of his time

A generation later, the fall out from the Halston III at JcPenney line continues to have a negative impact on licensing decisions by designers. At a New York Times Talk in 2009, uber designer Marc Jacobs discussed the impact that Halston’s line at JC Penney has had on his licensing decisions:

“When I got into this business, licensing was a big thing. I don’t think that it’s about that anymore. One doesn’t have to sign themselves up for this lifestyle their mugs in their kitchen will reflect. I remember when Halston did that thing with JCPenney, it was very bad for his couture business.” (source: Joelle Lifestyle)

While Jacobs may continue to resist the urge to create a masstige line, other designers, most notably Karl Lagerfeld, have embraced the concept (and the cash that comes with it). For up and coming designers like Proenza Schouler and Zac Posen, both of whom had a collection with Target, a masstige line is a way to expand brand awareness, while also creating an entry point for your higher priced brands.

Roy Halston died in 1990, but the Halston brand carried on. In 2007, Harvey Weinstein’s company along with Hilco Consumer Capital LLC purchased the brand. It struggled for a few years under that ownership team.

In 2010, Sarah Jessica Parker got involved in a design role. SJP didn’t last long, however — she walked away less than two years after taking the job. Weinstein had also severed ties at that point. Parker didn’t address why she left publicly until years later. And then, she only implied that the brand was so broken she couldn’t fix it.

You can still buy Halston pieces today. The line-up in 2021 still has that classic feel to it. Think wide-legged pants, jumpsuits, drape details, crepe, and silk.

You can also get the juicy — and fictionalized — scoop on Roy Halston’s wild lifestyle in a Netflix series titled Halston.

Had no idea about this. Myrtle Snow on American Horror Story Coven just referenced this and I had to check it out.

Last night I watched "Ultrasuede" on Netflix, a biography of Halston's life. He was ahead of his time, and a major influence on the fashion industry. His fashion was designed for the 1970's woman, during a time when women were really expressing their independence and political power, and so his fashion was greatly admired within the high fashion industry and among movie stars. I gathered that the JCPenney thing did not work because at that time the JCpenney customers were homemakers with small children. These were the babyboomers whose parents had survived a world war. His clothes were some of the most expensive in JCPenny. $50 for a blouse in the 1970s was like finding a blouse for $150 at Walmart today. The product did not match the customer or the society. I grew up in the 70s and I do feel there was a different view of clothing brands. Back then, high fashion belonged in high fashion stores, and in Paris, and if it were too common or accessible, it was no longer high fashion because there was probably something wrong with it, it probably wasn't the same, and someone might notice. He was asked in interviews if he thought this would downgrade his name. It's like he was warned in advance of what actually did happen. He didn't think so because he was a man ahead of his time, and willing to do something nobody had ever done before. For this he should never be considered a failure but a pioneer. I think these days we are more accepting of designers going mainstream because the world has gotten much smaller with the internet, and increasing numbers going to college and traveling the globe. I think the masses see themselves as more upgraded, rather than viewing the designers as downgraded. The masses now buy a wide variety of branded clothes online (Eddie Bauer, REI, North Face, Gap) instead of the standard functional elements from the JCPenny or Sears catalogue.

Wow, Janie, thanks for sharing such a well thought-out response. Love the other perspective of looking at mass-market designers trend.

Believe it or not I have a Halston tweed blazer with a black velvet collar from his JC Penney collection which I still wear, especially around the house.  I had received many compliments about this blazer and, although it's a little worn-looking, I still love it.  It is still a stylish and a warm jacket.

I also remember him being interviewed on one of the morning talk shows and they questioned him about designing for the not-so-fancy JC Penney's store and he was not that comfortable with being questioned about it.. What a shame that he got financially hurt by this decision but I was fortunate to benefit from him.  God rest his soul!

Love your article. I wrote one about Halston, too. http://www.fashion-law.org/2011/09/ultrasuede-in-search-of-halston.html