Are you planning to cry your eyes out, sing along to Celine Dion and ogle a much-younger Leo DiCaprio in multiple dimensions in Titanic 3D? Yeah, us too. And while the epic flick’s female lead wears some pretty amazing pieces onscreen (we’re still not over that swirl-patterned coat she leaves behind when she goes splashing into the flooded steerage section for Leo), her real-life style is equally impressive.

Want proof? Check out these eighteen amazing outfits Kate Winslet has worn over the past decade. She may favor simple silhouettes, minimal embellishment and LBDs, but the British actress’s wardrobe is far from boring. And frankly, we hope she “never lets go” of her signature look.

Looking simple and subdued in a black halter gown at the 2002 Golden Globes.

Kate later selected a minty-fresh Valentino dress for the 2007 Oscars—one of the more unexpected colors she’s ever worn.

When in doubt, Kate knows you can’t go wrong with a classic LBD. The one she’s wearing here is from Dolce & Gabbana.

The British actress always looks fantastic in jewel tones, and this perfectly-fitted Narciso Rodriguez she wore to the 2009 SAG Awards was no exception.

In a sophisticated black Yves Saint Laurent column gown at the 2009 Golden Globes.

This slate-gray satin YSL, with its contrasting black tulle panel, was a lovely choice for the 2009 Oscars.

Continuing her love affair with YSL, Kate chose a strapless silver look from the label for the 2010 Oscars.

Wearing yet another look by Stella McCartney at the 2011 Met Gala.

We loved this polka-dotted peekaboo Stella McCartney Kate wore to the premiere of her HBO miniseries Mildred Pierce.

Kate wowed in this cap-sleeved, fiery Elie Saab at the 2011 Emmys.

In black-and-white Jenny Packham at the 2012 Golden Globes.

After Kate slipped into this incredibly slimming Stella McCartney illusion dress, the piece swiftly sold out across the country. It’s not hard to see why.

Kate chose this black Jenny Packham gown with crystal-beaded cap sleeves for the premiere of Titanic 3D—and looked just as beautiful as she always does. 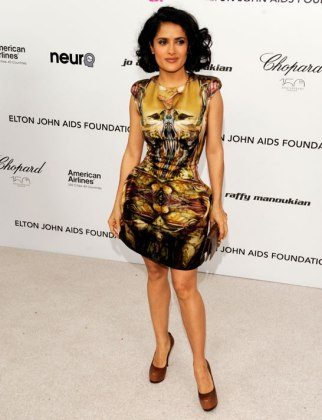 10 Great Fashion Movies (Plus 1!)
Read Next Post →
Comments are closed.